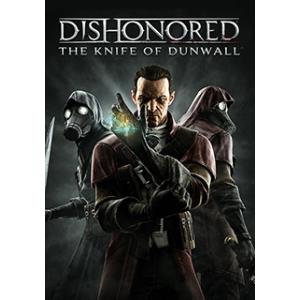 Dishonored The Knife Of Dunwall - Win

Take on the role of Daud,the legendary assassin who killed the Empress. This second add-on pack for the award-winning first person action game from Arkane Studios gives you a new perspective on Daud,and access to his weapons,gadgets,allies and supernatural abilities.
After assassinating the Empress,and forever changing the fate of Dunwall,you embark on a search for redemption. The Outsider reveals the key to your atonement,but who - or what - is Delilah? Accompanied by the Whalers,your loyal band of mercenary assassins,your search will take you through never-before-seen districts of Dunwall as you face off against new and terrible foes. Employ a unique arsenal that enhances Dishonored's dynamic combat,mobility and stealth systems. In the struggle to hang onto the last shred of your humanity,the choices you make will ultimately determine your fate.